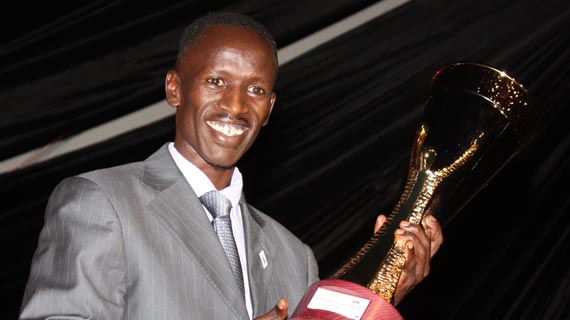 Kemboi, who is regarded the best barrier and hurdle athlete of this generation bagged the overall sportsman of the award, taking over from Olympic 800m champion David Rudisha currently recovering from a knee injury.

The lively Kemboi alluded how he had waited so long to finally clinch, what he termed as the only award missing from his cabinet.

“I have been runners up on a number of occasions, but I never gave up, I have learned to be patient in whatever I do .I am humbled to have won such an amazing award.”

The 34-year-old Kiplagat became the first woman to retain a World Marathon title at the championships in punishing conditions last August.

Kenya 7’s TEAM, the semi-finalist at the World cup and fifth in the International Rugby Board series topped the teams roll of honor ahead of Kenya Premier league Champions Gor Mahia and the KCB rugby club, the national sevens circuit winners and impala floodlight champions.

Sportsman of the year

Sportswoman of the year

Sports team of the Year- Men

Sports team of the Year- Women

Schools team of the year-Boys

Schools team of the year- Girls

Sports Federation/Association of the Year